An Evening With Pete Doherty Pt.2 [The Libertines]

"You've been waiting for this moment. Ladies and gentlemen Mr Carlos Barat...only joking! What do you expect for 25 quid? Then Barat bounded on stage, wearing a Dior Homme suit and a trilby. The duo played 13 Libertines classics, including 'What Katie Did' and 'Time For Heroes'. They whispered and hugged each other in between songs, while during their cover of Mama Cass With The Mamas & The Papas' 'Dream A Little Dream', Barat performed a little tap dancing routine. They played song 'Albion', with Barat joining in on vocals. The song was originally considered for The Libertines but was included on Babyshambles 2005 album 'Down In Albion'.
Returning for a quick encore, the pair played 'The Delaney', left the stage and then re-emerged triumphantly holding each others hands in the air. However the reunion continued outside the back of the venue. After the show fans shot round to the venue's dressing room windows and managed to convince the pair to reappear.
Appropriately enough Doherty and Barat performed an impromptu version of 'Can't Stand Me Now' for the mass of fans, while Doherty's girlfriend Kate Moss watched on.

The first YouTube clip contains the last song of Peter's solo performance followed by the 'reunion' with Carl and the first 4 songs they played together. 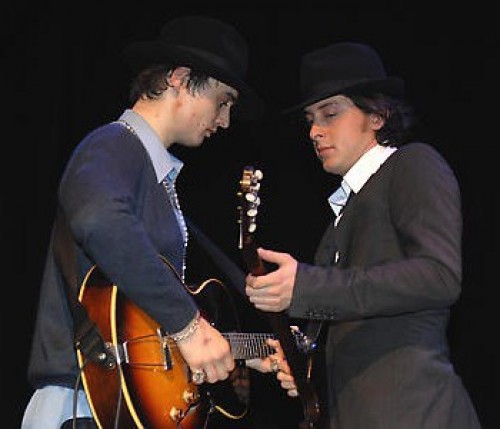