To the tune of Vera Lynns Well Meet Again, the four Libertines strolled on stage and the place went suitably ballistic. Without a second glance at the crowd, they grabbed their guitars and although the opening clash of the raucous Horrorshow was barely audible over the screams, it was clear that The Libertines had returned.

True to form, Pete Doherty wasted no time in booting his mic stand into the adorning crowd, turning to share with fellow frontman Carl Barat at centre stage. As the pair sang face to face, their rickety guitar riffs weaved in and out of each other chaotically causing frenzy amongst the energetic audience. There was no sign of the high tempo slowing and as the show went on the pair roamed the stage, swinging wildly, seemingly trading places after each line.

It soon became clear that the whole band was well rehearsed. Barat and Doherty were complemented brilliantly by the ever-shirtless Gary Powell on drums and the understated John Hassall on bass. Unlike Libertines shows of old, they all knew what they were playing and the setlist seemed set in stone. They mostly played their better known material but there were outings for The Delaney and rather more surprisingly Lust of the Libertines.

The Good Old Days may have received the biggest cheer but it was What Became of the Likely Lads that held the most significance. The song that encapsulated the demise of The Libertines back in 2004 now took on a different meaning. An answer, rather than a question. This is what became of the likely lads.

The songs themselves hadnt lost any of their charm and the crowd were beside themselves during every one of them, but the onstage chemistry that that earned The Libertines their reputation wasnt quite there yet. A few nervous smiles were shot across the stage but in the main they played it safe. Both Doherty and Barat looked far more sober than anyone had expected and there was almost no audience interaction. Just a simple Thanks, were The Libertines from Doherty towards the end of the set.

With the final chord of finisher I Get Along still reverberating around the venue, Doherty threw aside his guitar and entered in a long embrace with Barat to a great cheer from the awestruck crowd. Powell and Hassall soon joined in before taking a bow. A romantic moment to finish what was a successful night for The Libertines. Everything went smoothly and for that we should be thankful.

The download is not the complete set, in total the played; 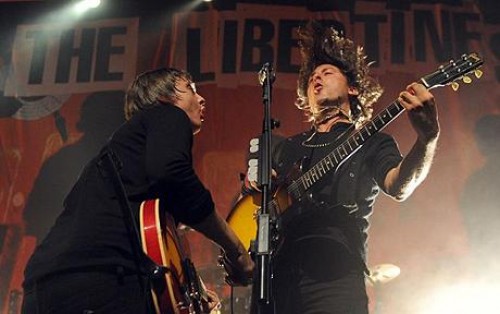