Remember that night The Libertines played for 60,000 people?

Review from the Telegraph;

Rock and roll moves in mysterious ways. The Libertines made their name in the early 2000s playing guerrilla gigs in a Bethnal Green flat, and the fractious quartet once briefly split up because guitarist/frontman Pete Doherty burgled fellow guitarist/frontman Carl Barâts digs. The band were never a great commercial success even when they were the shambolic heroes of British indie, and havent released any music together since their kicking, screaming goodbye album from 2004 entitled The Libertines. Yet a decade on they were headlining the same Hyde Park festival that last year hosted The Rolling Stones.

Doherty and Barât took to the stage to great cheers, gripping one another in a boyish half-hug. Barât, dressed in a red military jacket, a cigarette suspended nonchalantly from his mouth, seemed barely to have aged. At 35, Dohertys hair was greying, his neck jowly  but for a man who has spent a significant part of the last decade being as wasted as humanly possible, he looked well.

As the first buzzing guitars and throbbing snares of Vertigo kicked in, it was clear the band hadnt lost their spark. Their fans  always a fanatical bunch  went berserk, frenziedly crushing forwards and causing two long delays early on (the second frustratingly curtailing a storming Time For Heroes). I suppose it wouldnt be a Libertines gig without some knife-edge jeopardy.

Amid the hullabaloo, the band were roaringly good. Their music has always been an amalgam of great British bands  the clipped, snarling attack of early Clash, the tugging melodies of the Kinks, the ramshackle bonhomie of the Only Ones. So they sounded no more or less dated than when they first appeared on the scene. Bassist John Hassalls lead lines threaded between Gary Powells thumping punk-rock beats, providing a bed for Doherty and Barâts bustling riffs to duel over. It doesnt matter if youre out of tune, deadpanned Doherty, out of tune, on Radio America. It was all part of the turbulent fun.

Note from the Taper;

Recorded 20 meters from the speakers on the left side of the stage - would have liked to get a little closer, but was ancious to protect the mics - and my teeth. It could have been a little louder for my taste, and I had the impression that the volume was turnded down a little after the crowd problems began, to cool it down a little.
Not a very good recording, rather high level of drink and a lot of people who spent too much time talking about how much they were enjoying themselves. And the sound conditions were a little wavering, sometimes a slight breece noticable mostly in the high frequencies or a muffled sound when I didn't have a clear line at the speakers. 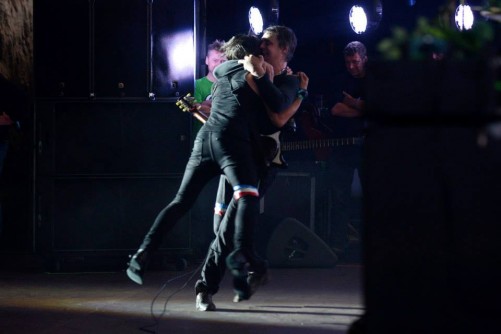