Peter was set to play a tribute gig dedicated to Johnny 'Rhythm' Sedassy, the London gig promoter who died in March 2009. Sedassy put on numerous gigs at Whitechapel's Rhythm Factory by artists including The Libertines, Babyshambles, Pete Doherty, The Noisettes, Razorlight, Selfish Cunt and The View. His nights provided a crucial (and largely unrecognised) foundation for the scene that formed in London following The Libertines' release of their debut album 'Up The Bracket'. The promoter passed away on after battling bowel cancer. Pete Doherty, The Paddingtons, Red Roots, Melody Nelson all were confirmed to play the Rhythm Factory on May 15. The gig was in memory of Sadassy and also to raise awareness for the Sir Michael Sobell Charity in Oxtord, where the promoter spent his final days.
During the concert Peter was joined by Carl,Gary and Drew Mcconnel on bass for some Libertines tracks.

NME about the gig:
"Three members of The Libertines reunited in the early hours of this morning (May 16) to play live together for the first time since they split in 2004.

Singer/guitarists Pete Doherty and Carl Barat were joined by drummer Gary Powell onstage at the London Rhythm Factory for a tribute gig to the late Johnny Sedassy, who used to put on gigs by the band, plus those by Doherty's current band Babyshambles and his solo shows.

Rumours had circulated that some kind of Libertines reunion was on the cards, although it was unclear under what form the show would take even as the early hours approached.

Babyshambles played a set before the reunion, taking the stage at 2:15am (BST) to play seven songs: 'I Wish', 'Killamangiro', 'Delivery', 'UnStookietitled', 'Back From The Dead', 'Baddies Boogie' and 'Albion'.

Then to the sound of screams and cheers from the crowd Barat took to the stage and strapped on a guitar, while Powell set up behind the drum kit. Babyshambles bassist Drew McConnell remained on stage to complete the four-piece.

The foursome launched into a frenetic version of early Libertines hit 'What A Waster', with Barat and Doherty sharing a microphone as they sang the lyrics.

They then played 'Up The Bracket', 'What Katy Did', 'Can't Stand Me Now', 'Time For Heroes' and 'Death On The Stairs', with Doherty leaping into the crowd near the end of the short set.

Barat and Powell left the stage to more cheers then Babyshambles' Adam Ficek and Mick Whitnall returned  plus a surprise guest.

The band were joined by their former guitarist Pat Walden, now playing with three-piece Big Dave, for the finale, playing 'Pipedown' and 'Fuck Forever' to close the eventful show in kinetic fashion." 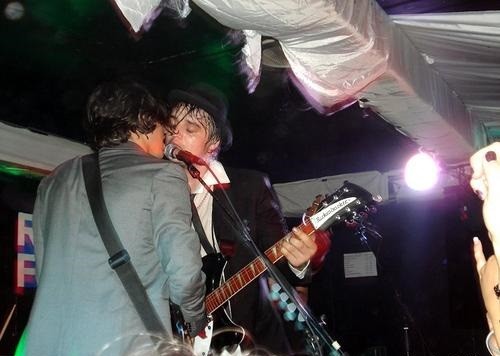