The Libertines played a secret show on the Friday evening at Glastonbury Festival 2015; filling in for Foo Fighters who had pulled out at the last minute, due to Dave Grohl breaking his leg. The band played three tracks due to appear on their new album; Anthem for Doomed Youth, Gunga Din and You're My Waterloo.

The Libertines had arrived by helicopter just hours before they were due to play. At 8.23pm, a banner, featuring the cover of the band's 2002 debut album 'Up The Bracket' was hoisted above the video screen at the rear of the stage, and the band, led by Pete Doherty, arrived to a huge roar from the crowd. Those watching at the side of the stage included Michael Eavis, Metallica's Lars Ulrich and Florence Welch.

The group begun with Delaney and Vertigo', after which Doherty took a deep swig from a bottle of beer. "Evening Glastonbury, hello," said Doherty, before paying tribute to his late friend Alan Wass, who died of a heart attack in April this year. Doherty said: "Mr Alan Wass if you're up there looking down, I'm down here looking up." The band then played 'Time For Heroes', after which Barat removed his bandana and tied it around Pete's waist.

"If you've quite got that out of your system," said Pete, stood at the microphone with Carl, before playing 'Can't Stand Me Now'. A cheer was raised when Doherty played the harmonica. The band's brand new song, 'Gunga Din' from the forthcoming third album, came next, with a slow, almost reggae like groove and a high-pitched guitar line.

'What Katy Did' and 'The Boy Looked At Johnny' followed, before Barat called singer-songwriter Ed Harcourt to the stage  twice, because it took him some time to arrive - to play keyboards on a song Barat described as being "very important to us"; 'You're My Waterloo'. Harcourt remained for new track 'Anthem For Doomed Youth', played for the first time. Harcourt exited before a well-received 'Death On The Stairs'.

Doherty commented that it was "nice to see a QPR flag in the crowd" before playing 'The Good Old Days' and, after a brief pause where Barat said they were "working out the setlist", 'Tell The King', 'I Get Along' and 'What A Waster', which begun with Barat and Doherty sharing a lingering moment staring into one another's eyes. The set ended with Dont Look Back Into The Sun, after which the band took their bows at the front of the stage. 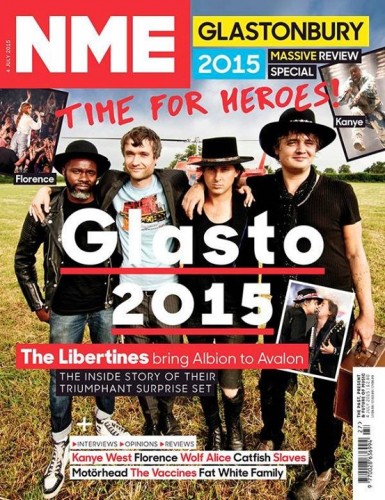