"Libertines singer Pete, who has just announced the band will reform for Leeds and Reading festival, performed the special show for friends and family at Greenock pub Ricos on Sunday. Pete, 31, hadn't played in the town since 2005 and fans turned rowdy as they waited for hours for the Babyshambles star to arrive from London for the gig.
Three hundred music lovers packed the intimate venue from 8pm in the belief that he would appear on stage shortly after 9pm. Pete's manager Adrian Hunter had initially been reluctant to confirm a stage time because of the casual nature of the concert but he advised party-goers to get there for "nine-ish".
Patient fans made the most of their waiting time by ordering drinks at the bar and cheered on a local act who were there to support the singer. By 12.30am, however, the crowd were becoming agitated after waiting for more than three hours for Pete. Many were about to call it a night when Pete arrived by private car at about 12.50am. He accepted an Easter egg from the Razz before heading straight on stage for what was a colourful and energetic 45-minute set."

Read the rest of the review over here. 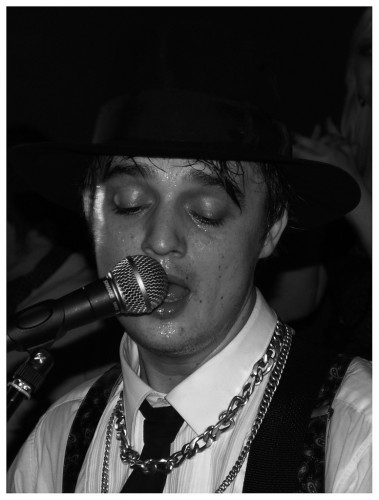