Deadwood is a Dirty Pretty Things single, released as the second single from Waterloo to Anywhere on July 10th 2006, with 2 new songs for b-sides; Puffin on a Coffin Nail (Demo) and One to My Left, with a cover of The Paddingtons' Panic Attack.

Deadwood was also released as a DVD Single, with interviews and live footage of the band performing the track, and also of their promo visit to Mexico.

The full, uncensored video directed by Barney Clay was made available on the band's website. However, the music video broadcast on music television was censored for television due to nudity and other "mature" content; namely a topless burlesque dancer. The band recruited fans via their web site to appear in the filming of the video, which took place at a farm at Ingatestone, Essex, on Tuesday, 16 May. 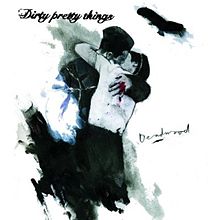