Confession of a Child of the Century / Movie (Peter Doherty)

Confession of a Child of the Century (French: La confession d'un enfant du siècle) is a 2012 French drama film directed by Sylvie Verheyde. The film competed in the Un Certain Regard section at the 2012 Cannes Film Festival. The film is an adaptation of Alfred de Musset's 1836 autobiographical novel of the same name.

This was Peter Doherty's debut as an actor. He played in the main cast together with Charlotte Gainsbourg. 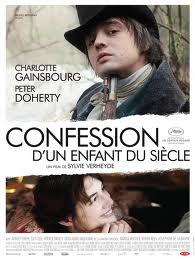