Jonathan Borrell (born 4 April 1980, in London, England) is an English singer and guitarist, and frontman of Razorlight. He grew up in and around the city of London, in Muswell Hill, and attended first St. Anthony's School, Hampstead, and then Highgate School, an expensive public school, with John Hassall, former bassist of The Libertines and frontman of Yeti.

It has been reported that he was briefly a stand-in bassist for The Libertines before they were signed, but in recent interviews he has claimed that this is not true. he has said "The Libertines are old mates of mine, ee were always really close and I never wanted to join their band when they asked me because I've got my own thing". There are many different explanations as to why Borrell left The Libertines (if indeed he was ever part of the band). In Pete Welsh's Kids in the Riot, it is alleged that Borrell was sacked as The Libertines' bassist for unreliable behaviour and not turning up to gigs, but in general there is little animosity between the two bands, and Borrell remains friends with Carl Barat. The Libertines' song "The Boy Looked at Johnny" is reputedly about Borrell, and Razorlight album track "Don't Go Back To Dalston" is reputedly directed at Peter Doherty, telling him to curtail his drug habit. Another Razorlight song talking about curtailing a drug habit is "Up All Night" which is largely misinterpreted as being a love song. However, Borrell's former friend Peter Doherty head butted him backstage at the Leeds Festival in 2005. After the headbutting, Doherty called Borrell a "fucking c**t and a poisonous snake 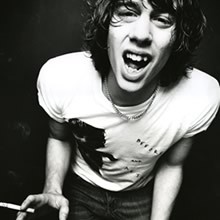