The Stookie & Jim Bumfest Demos are nine tracks, recorded by Peter Doherty and Mik Whitnall in November 2006 and uploaded to the internet using Doherty's website, French Dog Blues. On some of the tracks, more than 2 guitars can be heard, leading fans to question who the third person (besides Whitnall and Doherty) is. A lot of the tracks that were recorded for the Bumfest demos were later released on Babyshambles' second album, Shotter's Nation.

When The Stookie & Jim Bumfest Demos were first uploaded onto French Dog Blues, the original MP3 tags said that Delivery was track #8, and A Fool There Was was track #10, meaning that there may be one or more tracks missing from the session, however, the tracks were probably just tagged incorrectly.

The Stookie & Jim Bumfest Demos marks the first time many tracks were properly recorded by Babyshambles. For example, no prior recordings of Unstookie Titled or Carry On Up the Morning exist. When asked about the name of the session, Drew McConnell said; "Pete and Mick have got these alter-egos called Stookie and Jim that rear their heads when they've had a few drinks." 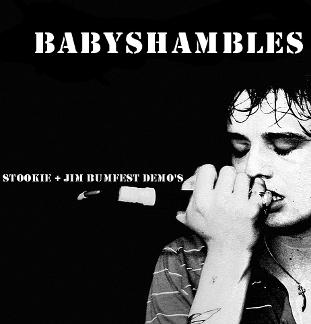