Gemma Clarke played drums for Babyshambles for a year, between 2004 and 2005. She left in January 2005 citing disagreements with management. She was preceded by Seb Rochford and succeeded by Adam Ficek.

After leaving the band, she wrote an open letter which read as follows:

"Dear Peter, I would like to make it very clear about my reasons for making the stand that I have. I will not continue to work under the management that you have chosen for the band as I could no longer be part of a machine that I feel is destroying you. I love you, the music, Patrick, Dru and Babyshambles. Please be safe and be careful. You are a great artist and have been a massive inspiration to me. Thanks for the experience and for a great time - keep safe and don't forget to call me... good luck for the future. xxxgemmaxxxx"

Clarke drummed on early Babyshambles tracks including their second single, Killamangiro. She also played on tracks like B-side The Man Who Came to Stay, and banned track Gang of Gin. She also attended the band's XFM session in December 2004, plays on the Zane Lowe radio 1 sessions and made a few television appearances with the band including Top of the Pops, CD:UK, Hero2Hero, XFM Christmas show and Tim Lovejoy's Allstar show.

Before and after her time in Babyshambles, Clarke toured incessantly with The Suffrajets. They released four singles in 2005/2006. "Sold" was released in May 2005, with "Everything You Do" following in October. "Going Nowhere" was released on March 27, 2006. Their next single "Worthy" was released on 26 June 2006. Their album 'Crooked Mile' went on release in September 2006, only available via their website. However, after her spending 11 years with The Suffrajets and co-founding the band, the group eventually split in 2007.

She then began playing drums in a band called The Krak, who include another former Suffrajet in their ranks and toured London, England and most of Europe including Belgium, France and Luxembourg. They released two singles 'Madame Riviere' (available through militant entertainment) in June 2008 and double A side 'School Disco (the kazoo song)/Estate Dwelling' in June 2009- available via notonyourradio records. The Krak also had extensive press and media coverage, playing guerilla gigs in shops, in London Zoo Gorilla enclosure, Space-hopping on the millennium bridge and the Orient Express. The band played at Glastonbury 2008 and made a collaboration with Inde/rock band The Sea, doing a cover version of well known 'Out Of Space' by The Prodigy. They also made a video for this track, which includes footage of the Glastonbury performance. They also headlined London venue The Scala in January 2009. Clarke ended The Krak in October 2009 and put together new project, Spitfire[www.thisisspitfire.co.uk], in January 2010 (with 2 previous members of The Krak; Tom Lattimer and Tom Keane). 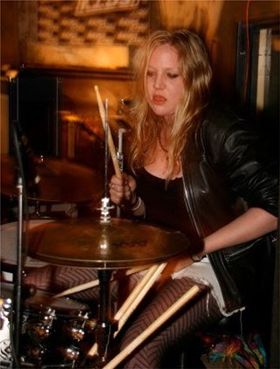