Nina Antonia (1960; Liverpool) is an London Based music journalist and author. She has written articles and books about Johnny Thunders, the New York Dolls, The Only Ones and a glam memoir entitled 'The Prettiest Star'. She has also contributed to Classic Rock, Mojo & Uncut as well penning liner notes for a variety of artists including Lou Reed, Nico, The Stooges, Vince Taylor, Link Wray and Wanda Jackson. She appeared in the movie New York Doll as well as the movie Looking For Johnny. Back in 2005 she had a interview with the Sex Pistols for Rock's Backpages. Untill a few years back Nina did poetry and spoken word readings with Jerome Alexandre on guitar, they performed at venues in both Brighton and London. For now she is the editor from Peter's new book From Albion to Shangri-La which is gonna be released July 1st. Nina is also gonna star with Peter in a movie called The Second Coming. (Release later 2014)

You can read a really good interview with Nina and Jerome from back in the spoken word days right here.
Read interviews with Nina about Peter's upcomming book here and here 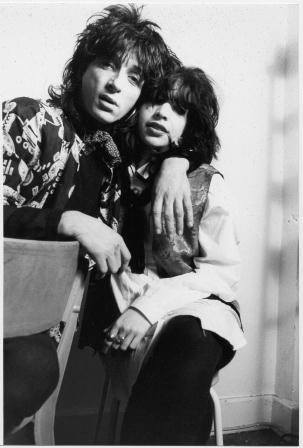