Kate Moss (born 16 January 1974) is an English model who rose to fame in the early 1990s as part of the heroin chic fashion trend. She is known for her waifish figure, and role in size zero fashion. She is also noted for her controversial private life, high-profile relationships, party lifestyle, and drug use. In 2007, TIME magazine named her one of the 100 most influential people in the world. In 2012, she came second on the Forbes top-earning models list, estimated to have earned $9.2 million in one year. Aside from modelling, Moss has embarked on numerous ventures, both fashion related and non-fashion related, which include her own clothing line and involvement in musical projects.

Music career
Moss appeared on Oasis singles "Don't Go Away" (1998) and "Fade Away" (1994), and on the Be Here Now album (1997), playing tambourine, Johnny Depp playing a guitar. She has appeared in music videos such as "Kowalski" by Primal Scream, "I Just Don't Know What to Do with Myself" by the White Stripes, "Something About the Way You Look Tonight" by Elton John, "Sex with Strangers" by Marianne Faithfull, "Love Don't Bother Me" by Stage Dolls, and "Delia's Gone" and "God's Gonna Cut You Down" by Johnny Cash.

She has also provided vocals for songs by Primal Scream (the 2003 version of "Some Velvet Morning"), The Lemonheads ("You're a Dirty Robot") and Babyshambles ("La Belle et la Bête"), a song she also sang live on stage with Babyshambles multiple times, including at l'Elysée Montmartre on November 13, 2006. The last time she performed with the band was during their gig at Glastonbury in 2007.
Prior to breaking up with Pete Doherty, Moss co-wrote four songs on Babyshambles' second album Shotter's Nation"You Talk", "French Dog Blues", "Baddie's Boogie", and "Deft Left Hand".

Other
In 1999, Moss played a non-musical role in the British screen comedy Blackadder: Back & Forth, appearing both as Maid Marian and as a fictional Queen of England "who looks good naked". Director and writer Richard Curtis said in the making of video, that they wanted "the best looking woman in England" to play the role. 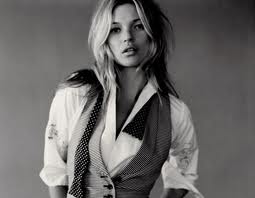