Up the Bracket [The Libertines]

Up the Bracket is the debut album from British band The Libertines, released on 14 October 2002 and reaching #35 in the UK Albums chart. It was produced by Mick Jones (who has also produced other Libertines and Babyshambles material) and released on Rough Trade Records. The album was re-released on 8th September 2003 with additional track, What a Waster, and a DVD, featuring the promotional videos for singles Up the Bracket, Time for Heroes and I Get Along. In April 2008, BBC Radio 1 DJ Zane Lowe chose the album as one of his masterpieces, playing the album in full with interviews from the band members, fans and fellow musicians who were influenced by the album.

The title "Up the Bracket" alludes to a slang phrase meaning a punch in the throat, used by British comedian Tony Hancock in Hancock's Half Hour. Hancock is also referenced in the opening track, Vertigo - "lead pipes, your fortune's made" is a line from the Half Hour episode 'The Poetry Society'. Peter Doherty is known to be a life-long fan of Hancock and a member of the Tony Hancock Appreciation Society, and has featured in a BBC documentary about Hancock.

Most tracks were composed in 2001 as part of then-manager Banny Pootschi's Plan A to sign The Libertines to Rough Trade Records. The new songs are considerably more noisy and punk than The Libertines' previous sound, in an effort to emulate the commercial success of The Strokes. Only Radio America and The Good Old Days (and extra track Mockingbird) were carried over from their previous repertoire. 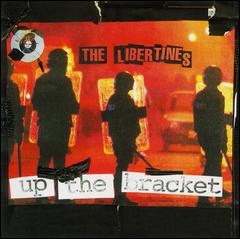