In 2001, The Libertines manager Banny Poostchi wanted the band to make a compilation of the best demos that they had recorded to date. Carl Barat compiled the demos and the name Legs XI was chosen by Pootschi, as the cover featured the crossed legs of ballerina Darcey Bussell, the "most famous legs in England."

Legs XI sounds much different from any of The Libertines' released material and is known as a 'swing' session, with Doherty feigning a Frank Sinatra-esque vocal style. Bassist John Hassall sings on Sister Sister in this session, a song that he would go on to release many years later with his new band, Yeti. The track Music When the Lights Go Out also features the former Libertines cellist Vicky Chapman.

Although it was never officially released on a label, Legs XI has since been made available for fans to download for free on the Internet, originally via the now closed www.thelibertines.co.nr. Sometimes original copies (that include the original artwork, not just scanned copies) can be found on markets in London. Copies are also available on eBay, but the majority turn out to be fake CD-R versions, downloaded and burned for free, and fans are discouraged from buying these. 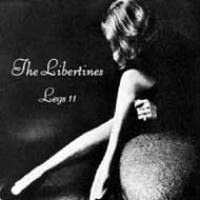