Puffing on a Coffin Nail: Live at the Forum [Dirty Pretty Things]

"Puffing On a Coffin Nail (Live at the Forum)" is a DVD released in October 2006, produced by Gerry Gallacher and Ian Brenchley. (Note the spelling is "Puffing" rather than "Puffin'" as in the B-side song title.)

It was released in two formats; one being a limited edition run of 5000 numbered copies. The main section is made up of recordings of Dirty Pretty Things' three night residency at the Kentish Town Forum, London between May 22nd - 24th 2006.

The second part, entitled "Go Anywhere", consists of different versions of the track listing recorded at various venues around the world, including the band's first show in Rome in October 2005.

The "extras" section has a documentary of the Forum shows plus footage of the Camden Crawl show from April 2006, the making of the "Bang Bang You're Dead", "Deadwood" and "Wondering" videos and rehearsal room footage. 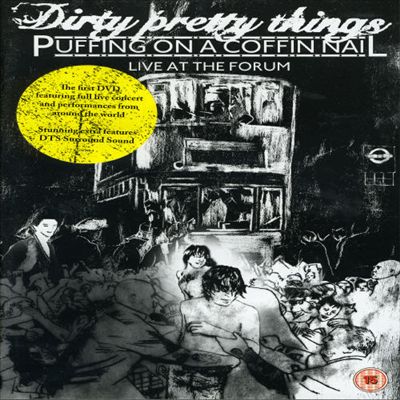