The album was produced by Stephen Street and recorded at Olympic Studios in London, England. The acoustic closer, Lost Art of Murder, features a guest appearance from Bert Jansch. It is the first Peter Doherty album without Mick Jones producing and his first released by a major label.

In an interview with NME magazine, Peter Doherty said that The Strokes, and solo guitar player, Albert Hammond, Jr. plays guitar on the album. Doherty did not mention the track's name, but did say it was an extremely short three bars of music. A limited edition of the album contains a DVD with a 40-minute track-by-track interview, 5 live songs recorded at the Boogaloo on 5 July 2007, and the music video of Delivery.

The album's cover painting by Alizé Meurisse is based on the painting The Death of Chatterton by Henry Wallis (1856). It also originally featured an image of Kate Moss, which was replaced with an unknown lookalike.

It was reported Kate Moss has given up the royalties for the songs she co-wrote on Shotter's Nation. The song There She Goes has been compared to "Lovecats" by The Cure by Garry Mulholland of The Observer. Drew McConnell revealed in interviews that the band wanted the song to sound something like "Walk on the Wild Side" by Lou Reed.

The band promoted the album by appearing in TV and radio shows in France and in the UK. They then played Delivery at the MTV EMA, with the performance being widely acclaimed. There is a video for French Dog Blues directed by David Mullett, featuring an animated French Dog. Ian Brown has songwriting credits to the aforementioned song, because it contains a verse from "Deep Pile Dreams", a song from Brown's first album, Unfinished Monkey Business. 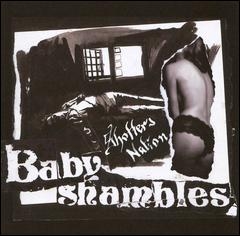