Before its release in March 2009, most of the songs had already been played live or could be found on the Internet as demo versions, the only exception being I Am the Rain, co-written by John Robinson of The Bandits, which replaced Through the Looking Glass at a very late stage (the versions sent to the press actually included Through the Looking Glass). '1939 Returning' was originally planned to be a duet with Amy Winehouse; a demo version was recorded with Winehouse on vocals.

Grace/Wastelands was recorded at Olympic Studios in London, which closed soon after, and was produced by Stephen Street. It was released on EMI on 16 March 2009 in the UK and on Astralwelks on 25 March 2009 in America. The NME reviewed the album in January 2009, calling it "the most diverse album Pete has made by a long stretch.". Doherty was also interviewed by Clash Music (who later uploaded two exclusive tracks) about the album, and commented "I shouldnt say this really, but I cant see any singles on there, to be honest, mate."

The album name is inspired from a photo of Elvis kissing a girl in a stairwell backstage, which EMI deemed too costly to use as the cover-art. In an interview with French radio, Doherty explained that the name "Grace/Wastelands" also illustrated two different states, that of "grace" and that of "waste." Doherty further told XFM that he had composed a song of the same title that Stephen Street did not include on the album. On October 1st 2008, prior to naming his album, Doherty posted a video featuring him and Kate Moss on his Youtube account, titled "gracewasteland/s."

The album cover is instead painted by Alizé Meurisse with contributions by Doherty, and is inspired by Oscar Wilde's French play, 'Salomé.

The first single from the album, Last of the English Roses, was released on 9 March 2009, with Through the Looking Glass and Don't Look Back as B Sides. Grace/Wastelands was leaked onto the Internet in full when it was uploaded onto Doherty's official MySpace page on March 9, 2009. 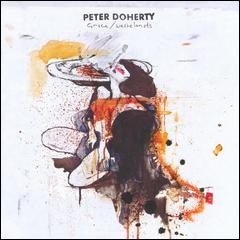