Anthems for Doomed Youth [The Libertines]

Anthems for Doomed Youth is the third studio album by The Libertines, originally due to be released September 4th 2015, but eventually released on the 11th. The title is borrowed from the song of a similar name ("Anthem for Doomed Youth"). The album currently holds a score of 69/100 on Metacritic, indicating generally favourable reviews.

The album is dedicated to the late Alan Wass; ""We're going to dedicate the record to his memory. His death affected me in a big way. I know he would have been really proud of us for getting the record done and coming back and doing loads of festivals. He was big on the work ethic, Alan. I know he'd be really proud of the record, and that we're dedicating it to his memory. My first port of call when I get back to London will be his grave." - Doherty

The album was released in 3 formats: Digital, CD, and Vinyl. There is also a Deluxe Edition, released on CD, and Digitally, including extra tracks. A box set, including a Deluxe CD, a Vinyl copy, exclusive film, and signed art prints, was also released. To celebrate the release of the album 'a week of shenanigans' was announced, mainly taking place at Camden's Dublin Castle venue. The run of events was titled 'Somewhere over the railings'.

The album contains two literary references, the tracks "Anthem for Doomed Youth" and "Gunga Din" referencing the poems of the same name by Wilfred Owen and Rudyard Kipling, respectively.

NME wrote about the album:
Written while war poet Wilfred Owen was a shell-shocked 24-year-old patient at Craiglockhart War Hospital in Edinburgh in 1917, the original Anthem For Doomed Youth is a sonnet dedicated to young soldiers lost in World War I.
Yet this wasnt the original plan for the title of The Libs third album, and the artwork references an alternative name for the record that the band initially preferred: Hallelujah Day. It was, says Pete Doherty, Carls idea. He adds: I wasnt sure about it at first, but it dawned on me that it was the perfect title. Its uplifting. Its the overall feeling. Its from the song Belly Of The Beast, and a little refrain at the end going Hallelujah day! But this is The Libertines were talking about, so things changed. And after an ongoing discussion that came right down to the wire, the band settled on Anthems For Doomed Youth.
Titles are always a tough one, says Carl Barât of the bands indecision. We need to have a naming ceremony really. The whole titling malarkey is always something weve done last, when youre crossing the ts and dotting the is.
Its fairly standard, agrees bassist John Hassall. There were various titles knocking round. We were never quite sure what we were going to choose until the last moment when we had to decide."
Its only just sinking in that people have got to meet deadlines again, says Roger Sargent. The label have been great, and xtremely patient. You wouldnt think that a major record label would give complete artistic control to the band, but they very much have. 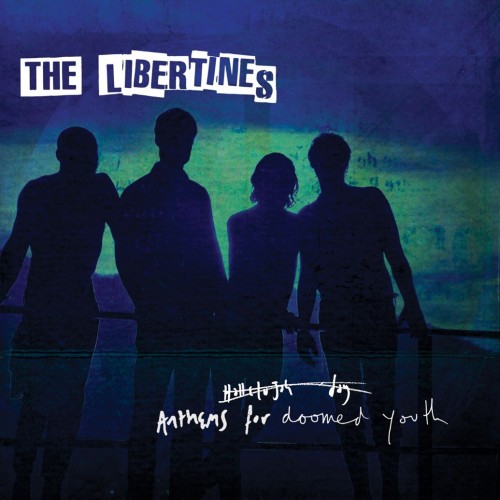