The Legend Of Yeti Gonzales [Yeti]

The Legend of Yeti Gonzales is the UK debut album by Yeti, founded in 2005. Although the album is classed as a debut, Yeti previously released a Japanese-only compilation album, Yume!, in 2007. The album was recorded by Yeti in December of 2007, in Eastcote Studios, and released on "Get Up & Go Records".

The Legend of Yeti Gonzales was released in June 2008; almost four years after Yeti were founded by John Hassall, following the breakup of The Libertines. It was reviewed in Gigwise and received 3 and a half out of 5 stars, with the reviewer saying "The Legend of Yeti Gonzales is a damn fine album to kick back to and enjoy in all its undemanding and straightforward glory." It was also reviewed by The Mirror, who gave it 4/5 stars. The album contains the track Sister Sister, originally written by Hassall and recorded for The Libertines' Legs XI demos, many years before this release. 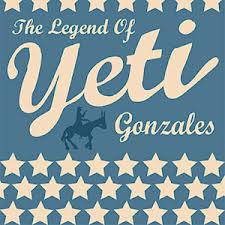